A Visit To See Father Christmas

Today I took the children to Hatton Adventure World for their Christmas festivities.

The children as per usual had no idea where we were going so the car journey was a big game of guess where we could be going today.

We arrived at Hatton Adventure World with the children still thinking we were going to Lego Land, Cadbury World, Cbeebies Land or wherever else they had guessed but not the right guess as I informed them as I parked the car. 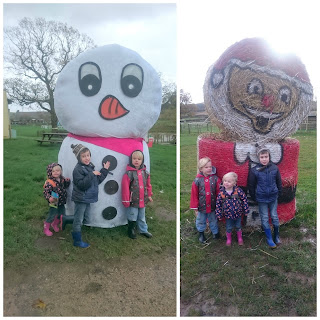 We were booked in to see Santa at 11 am, as it was only 10.30 we had a walk round the farm and saw rabbits, goats, chickens, guinea pigs, pigs and donkeys.

Then the children decided they wanted to play on the JCB area followed by the giant sand pit area, why not I thought so they did. 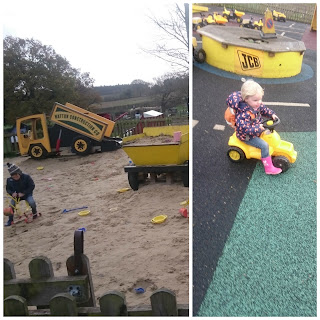 Well before we saw Santa we stopped off in the festive arts and crafts tent and the children happily sat and made Christmas cards for mummy, each their own design too.

Well it was that time, the time all children love, the time to visit Father Christmas himself.
They were so excited, they loved walking through the Elf Workshop area and chatting to Santa's helpers about Christmas and what they wanted this year. 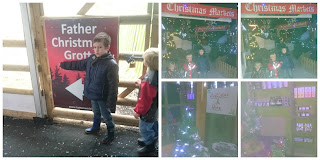 Before we were took through to see Santa there was one last surprise awaiting the children, real reindeer, they were in ore of them, they wanted to stay there and chat to them and stroke them more than going to see Santa I think. 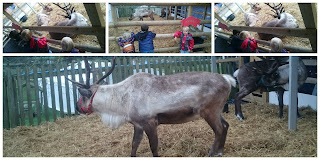 Once they were in Santa's grotto they didn't want to shut up they wanted to tell Santa everything on their Christmas list to the point there were no presents left to ask for.

Then they had their photo took with Santa then he checked the good/bad boy's and girl's list and told them they had been very good this year, to be honest I think he was looking at the wrong list lol, anyhow he gave them their own special key for them to take to the elf's workshop and wished them a Merry Christmas in return TP told him we had a special key for our house so he can deliver their toys to them on Christmas Eve.

In the elf's workshop they were so excited, there were shelves and shelves full to the rim of toys of all sizes, shapes and variety.

They wanted this one and that one, "no daddy I now want this one" "are you sure I replied" to which I got in reply "no daddy I've changed my mind" eventually they all decided what they wanted and they exchanged their golden key for their chosen present.

As the weather wasn't too great today, in fact it was gale force winds outside, well it felt like it anyhow, I took the children indoors into the big soft play area where they happily played then had a pizza lunch. 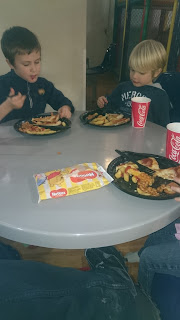 After lunch we went to a Christmas storytelling show, the story being read today was about a brother and sister who build a snowman on Christmas Eve. 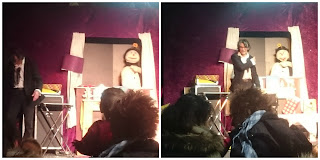 The kids loved this storytelling time as it was a fun show and contained a puppet snowman who interacted with the kids throughout the story.

Well after this show we had a look round the Christmas market, I brought the children some sweets and we headed home after a lovely day out.
Posted by Unknown at 21:32