Our Trip To Birmingham

Today was the day that I ventured out alone with all three of my monsters, I didn't just venture to the local shops, Oh No..... I took them on a train to Birmingham and then on to the theatre to see Peppa Pig Live.

Well as I said our journey began at our local train station where we boarded the train and headed to Birmingham, the journey was made more interesting by TP gluing himself to the window at every stop and trying to convince me it was Birmingham, he was stumped when we arrived and I agreed that it was indeed our stop lol.

Well we made our way to the theatre to collect our tickets, I would like to say a massive thank you at this point to Michelle @SeeingRainbows for running her competition which I was lucky enough to win which enabled me to treat my kids to this fabulous day out.

When we arrived at the theatre, the kids were so excited when they realised they were going to see Peppa Pig Live that when I told them it didn't start for another hour they were absolutely gutted. 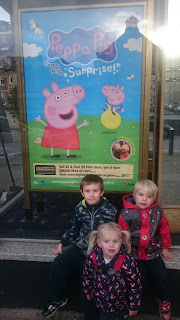 Well to pass the time away for a bit I decided it would be fun to stop off at Nostalgia & Comics, oh my oh my why oh why did I think that? (My kids are fastly growing up and becoming Marvel fans thanks to their mum and her partners loving of Marvel) once they entered inside the shop the three of them were in ore of everything they didn't know which way to go first bless them. Figures, comics, books, badges you name it they wanted lol, it kept them amused for a bit so thst was good to be honest.

Well we made our way back to the theatre ready to take our seats for the show.

The show itself was great, ( I won't spoil it incase anyones going to see it) it was full of dancing and singing and lots of audience participation. 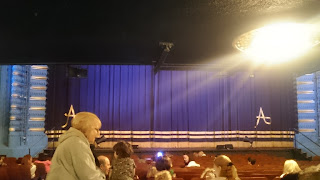 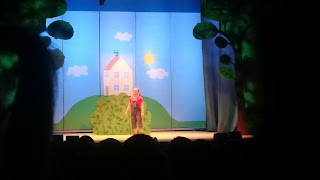 My three never stayed still, they were clapping abd cheering, dancing and singing they absolutely loved it from start to finish they even moaned that there was an interval cause they were enjoying it so much lol.

After the show we made our way back towards the train station but we made a slight detour as it was dark I walked them through the German Market to see all the lovely stalls lit up at night, it is a lovely sight to see and it does get you in the Christmas mood to be fair lol. 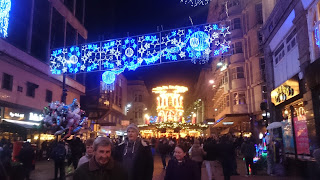