As many of you out there are aware the London Underground is a great way of getting from place to place quickly, well that is unless you are by yourself with two kids in a pushchair.

While my darling wife was at Britmums live this year I thought it would be a lovely idea to take my two lads on a boys weekend sight seeing round London,well to be fair we did a lot of sight seeing weather they wanted to or not, perks of being the parent I guess lol.

Well we had walked from London bridge (were my eldest boy had given us a lovely rendition of London bridge is falling down) to Buckingham palace where my big boy was expecting to wave
and say hi to the queen,
sadly no show I am afraid to say, which slightly disappointed him. 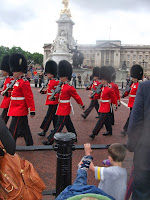 On walking back through the park I said to the boys we would catch the tube and head back over to where mummy was to meet up with her later to head on home, so we walked to Piccadilly Circus to catch the tube to barbican. 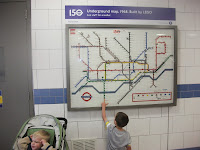 Once on the tube I encountered an occasion I hadn't witnessed before and hopefully I will never witness again to be honest. ( when I told my relative what I am about to tell you, all her reply was "did you photograph it?").

Well this is where my story could of got very gruesome indeed, like all the other commuters I boarded the tube with my buggy and waited for the tube to start moving to take us on our way. I was standing just inside the carriage as they wasn't a lot of room as it was early evening an the tube was fairly full.

I felt someone squeeze on behind at the very last minute, I didn't think any more of it to be honest.
Then there was a little commotion behind as I turned round to see what was occurring I felt the tube begin to slightly move.

I turned round to see what I now know to be a male commuter with his head, (yes i said his head, not his arm or leg but his head) trapped in the closed door and a female commuter trying to help him free his trapped head from the said closed door.

All I could do, which now I feel really bad about was turn round and try not to laugh too loud at this poor man's potentially horrific injury.

Yes to end on a good note at the next station the man along with a fully attached head departed the tube and continued his journey as did I.