As I am due back at work on Saturday we thought we'd take the kids to Alton Towers.

As Grandma was off work too the kids wanted Grandma to come too so we made extra room in the car and took Grandma with us.

We arrived at the park at about 9 am, by the time we parked up and got into the park it was about 9.30 but thankfully we were let into Cbeebies Land early so the kids got on Get Set Go Tree Top Adventure and In The Night Garden Magical Boat Ride before it got busy, yes it got busy indeed as throughout the day the queue time were 40 mins on average for these two rides.

Whilst Grandma and I took the kids on these rides mummy took herself off to the Smiler to get her adult ride done and out of way save queuing later, again another good job as queue time for Smiler was on average 2 hours.

When mummy caught back up with us she and Grandma took the kids on The Numtums Number Go Round, 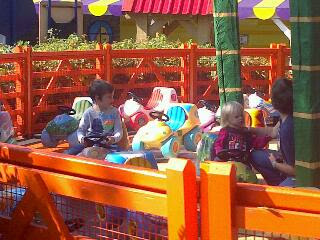 Whilst they were on the ride I was admiring the carp swimming about in the pond next to the ride, as you can see not only was it a beautiful fish but a big fish too. 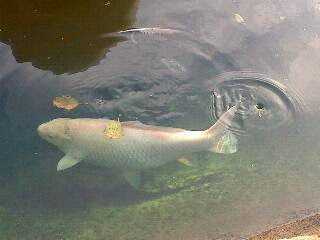 After this we took them into Charlie & Lola's Moonsquirters and Green drops, all three kids loved this even mummy and Grandma enjoyed themselves playing on the interactive floor with L-A. 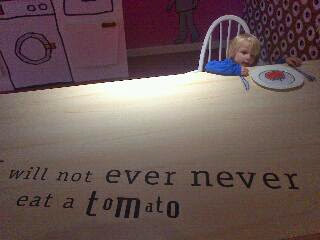 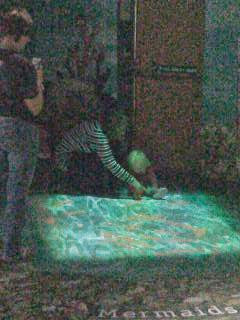 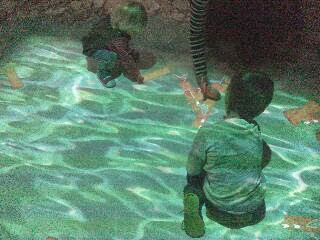 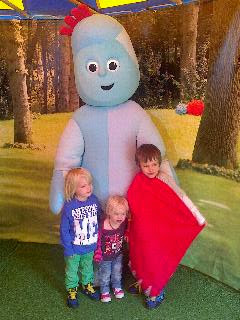 and met the ZingZillas and we had a family photo took with them, yes a family picture including me which is a rarity lol. 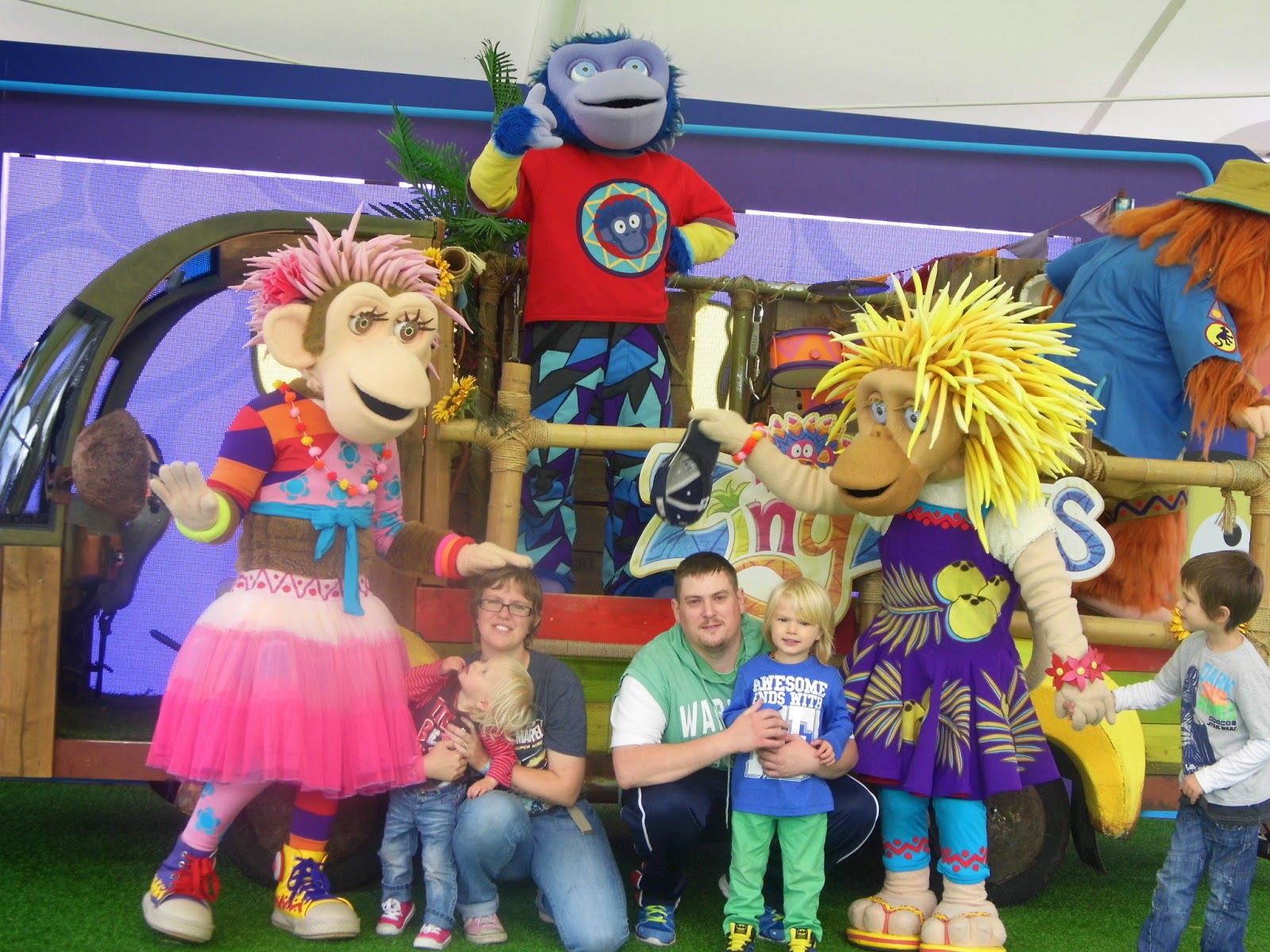 We then made our way to Duel, on the way though mummy and Grandma took the boys on Heave 'Ho' then mummy took JR on Marauder's Mayhem. 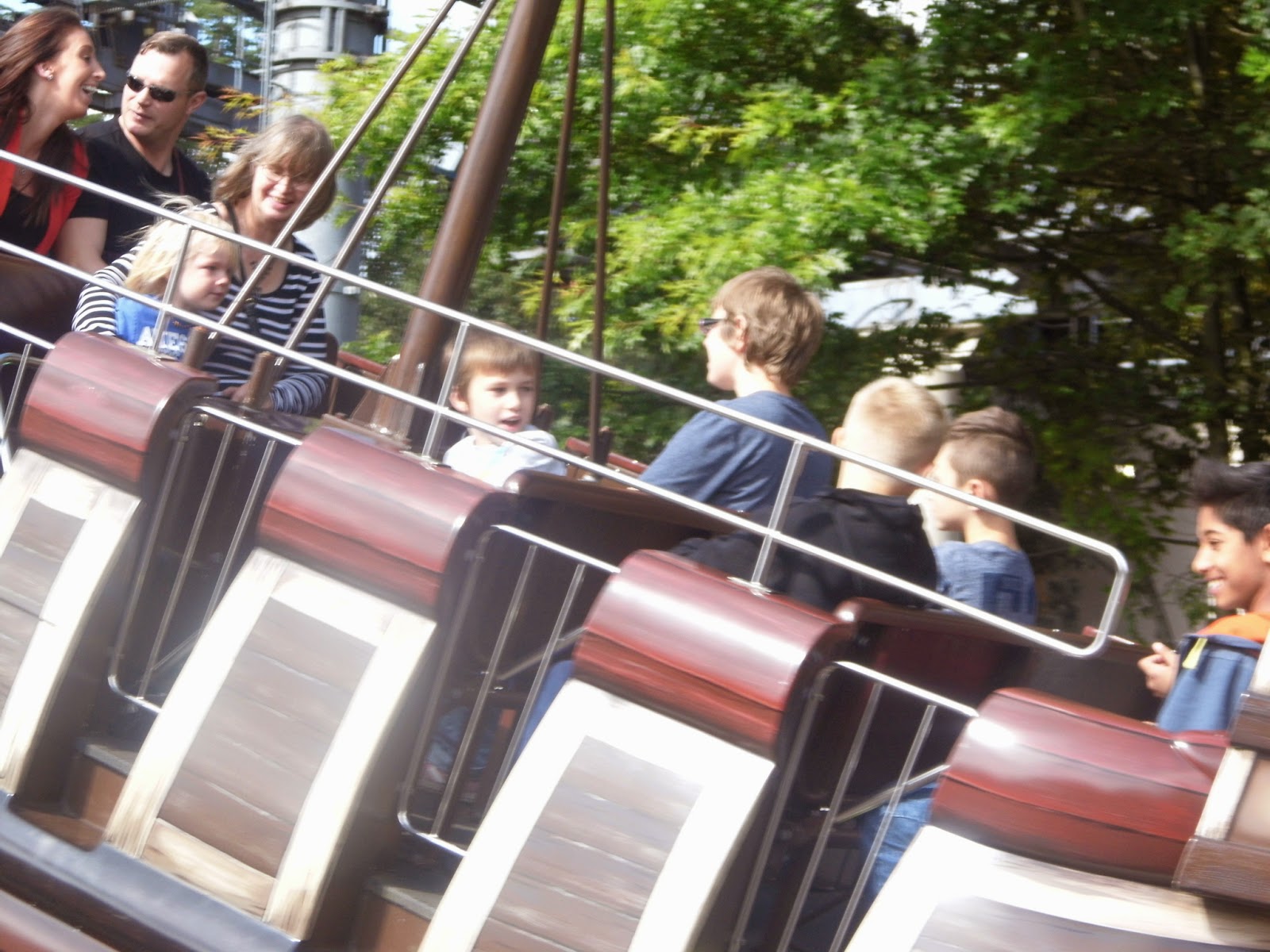 Whilst they queued for that ride myself and Grandma took L-A and TP to SharkBait Reef to see all the amazing sea life on show, totally forgetting Grandma doesn't like fish of any kind. 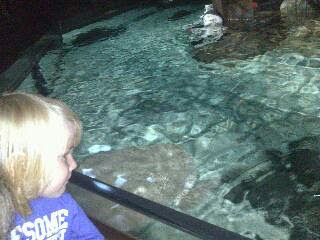 When we all met up again we made our way to Duel, at first the boys were nervous but they loved, they really enjoyed shooting 'the baddies' as they said. 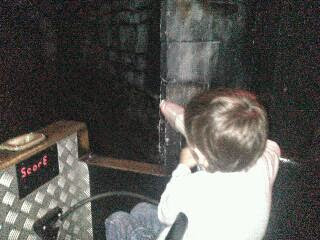 We then got onto the Skyride (our first of many times this visit lol) and headed to Cloud Cuckoo Land. 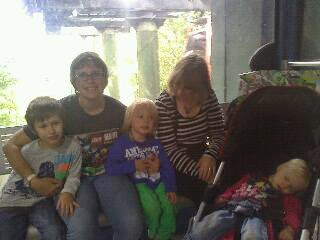 Mummy and Grandma took the boys into the Ice Age 4D Experience, I sat this one out not only because I needed a recharge break but also cause L-A was fast asleep lol. 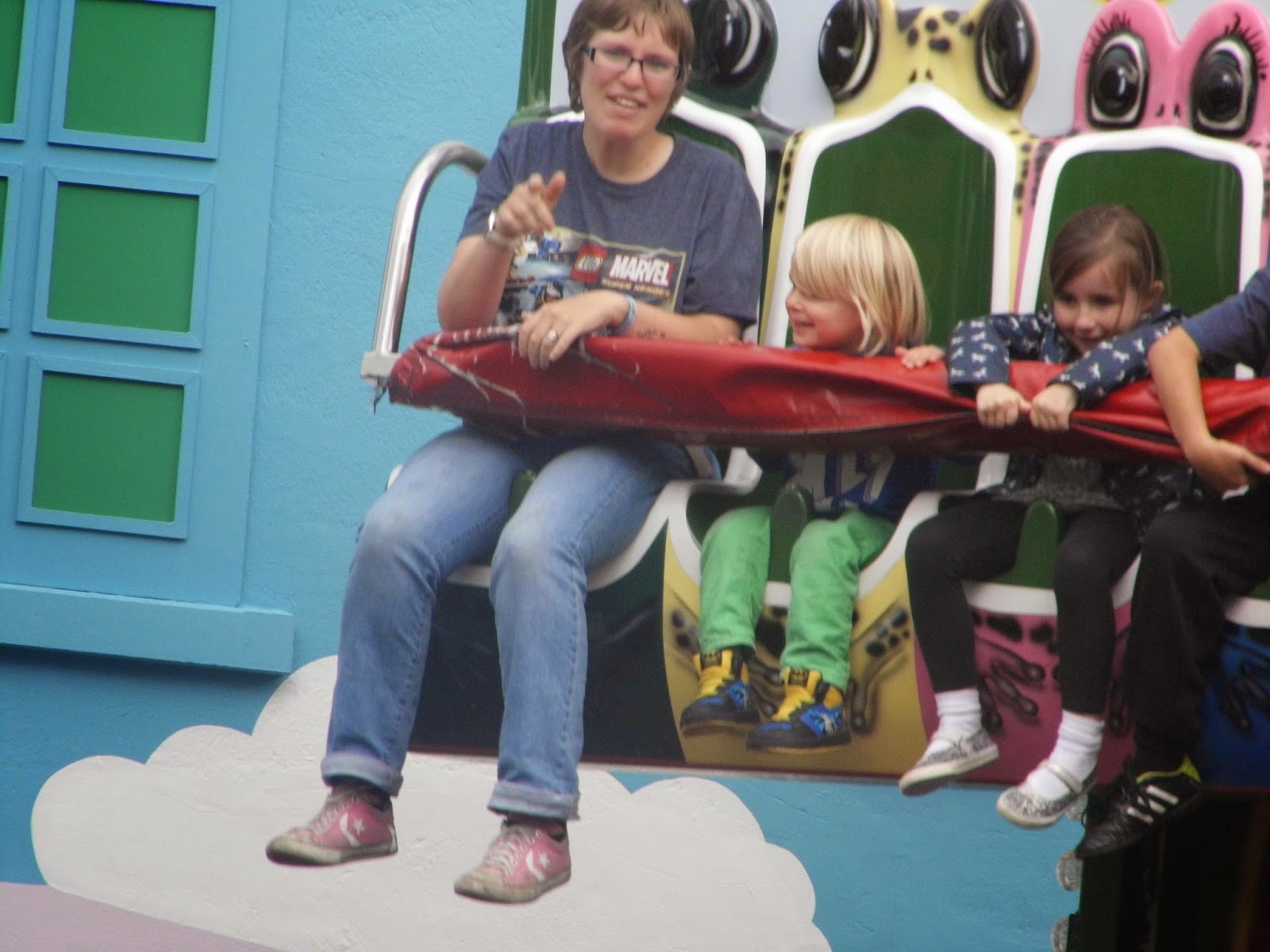 Then mummy and Grandma took the boys on the carousel ride 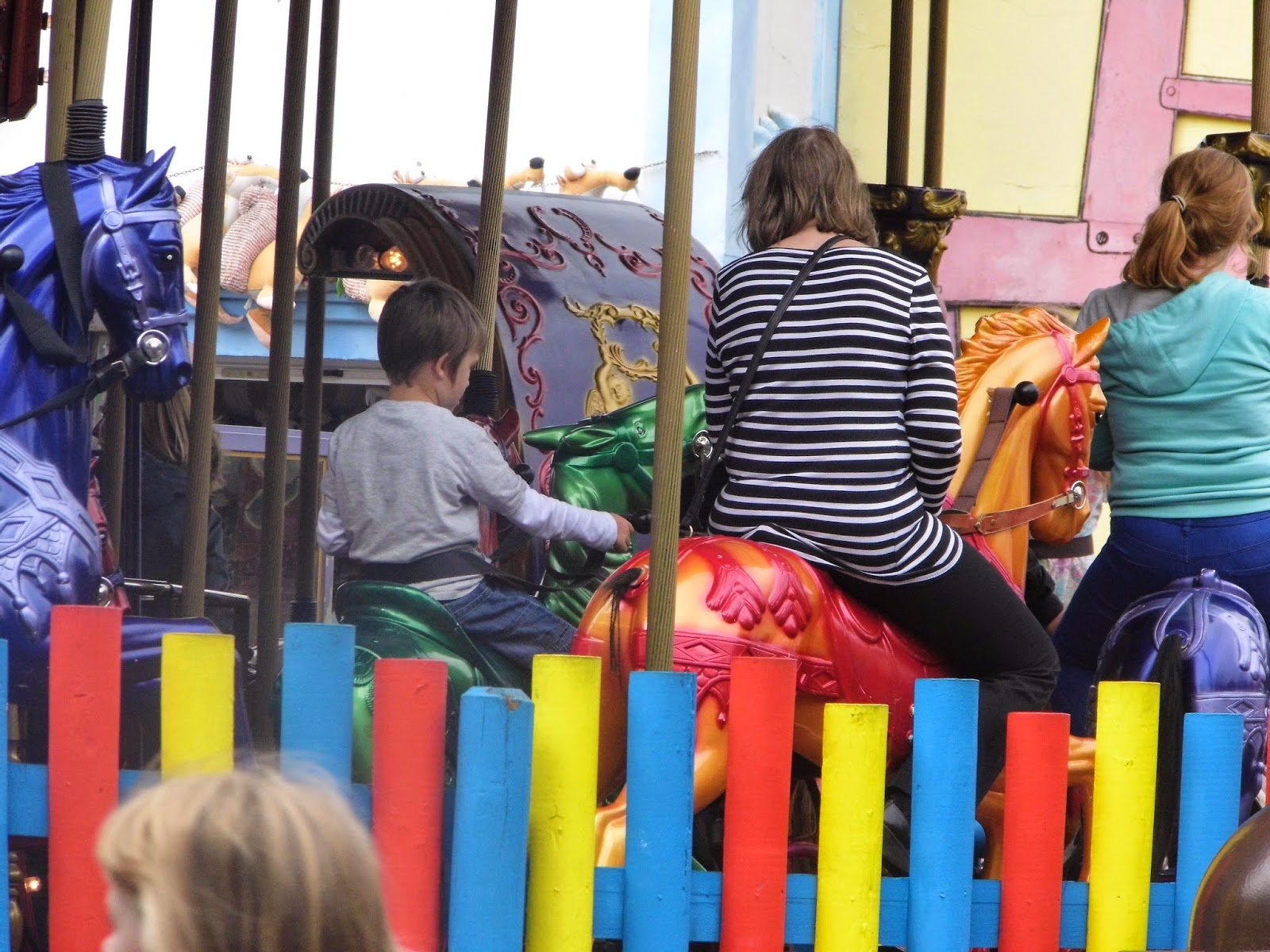 We had a lunch break as the kids were starving, even though they had eaten pancakes and croissants in the car on the way lol.

After lunch we made our way back to Cbeebies Land but on the way mummy and the boys took Grandma on the Runaway Mine Train, as L-A was still asleep I stayed back and looked after her.

Seeing Grandma's face after coming off the ride I think she won't be jumping back in the queue to ride it again lol.

Well we made our way to Cbeebies Land for their kids to have some more fun, firstly they got to meet and have their picture with Tree Fu Tom, L-A loved this and even gave Tom a kiss. 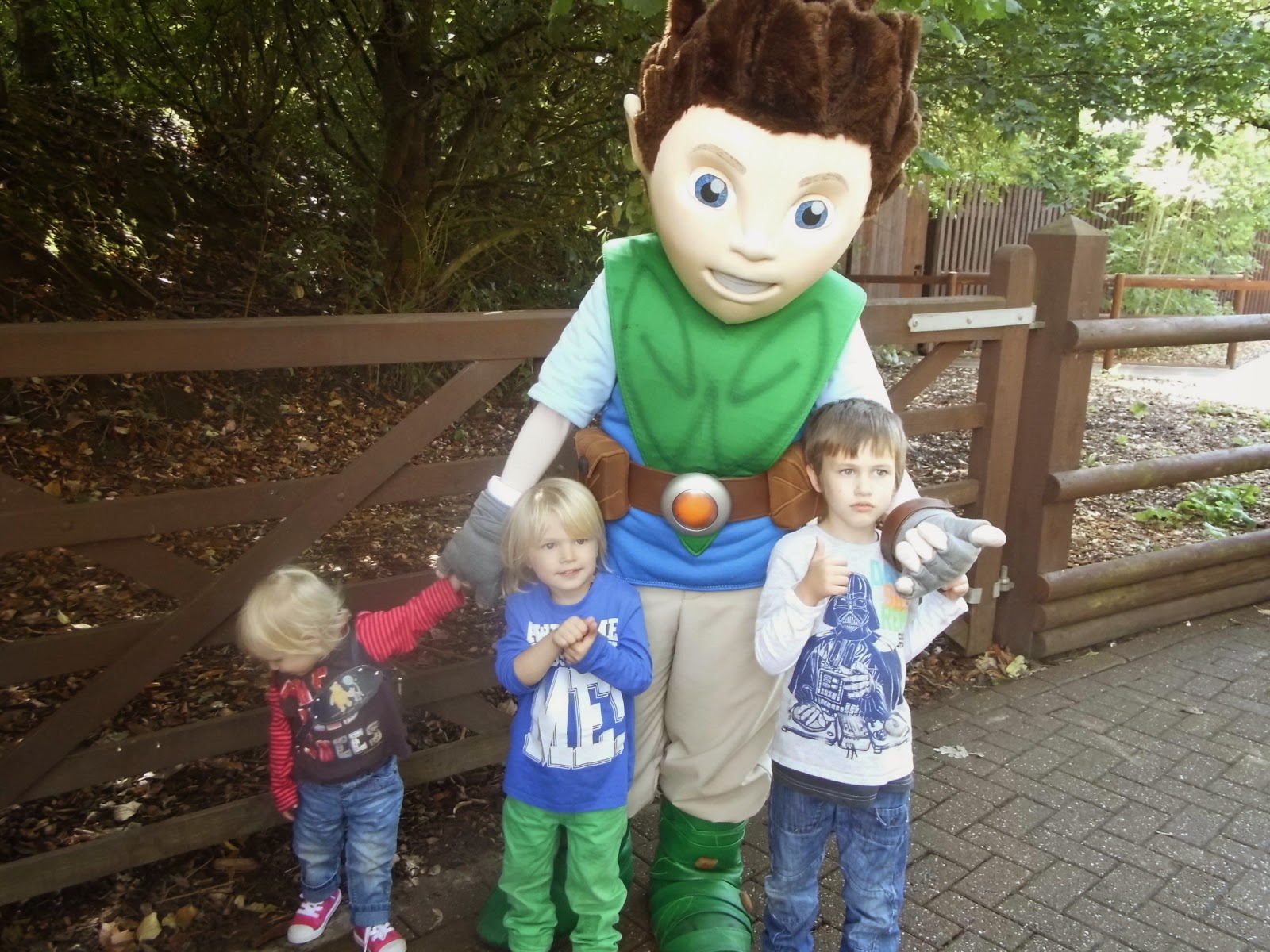 The kids then went in the the Tree Fu Tom Training Camp, all three got to have some relaxing time JR even became a dare devil and climbed to the top of the climbing web climber which terrified mummy. 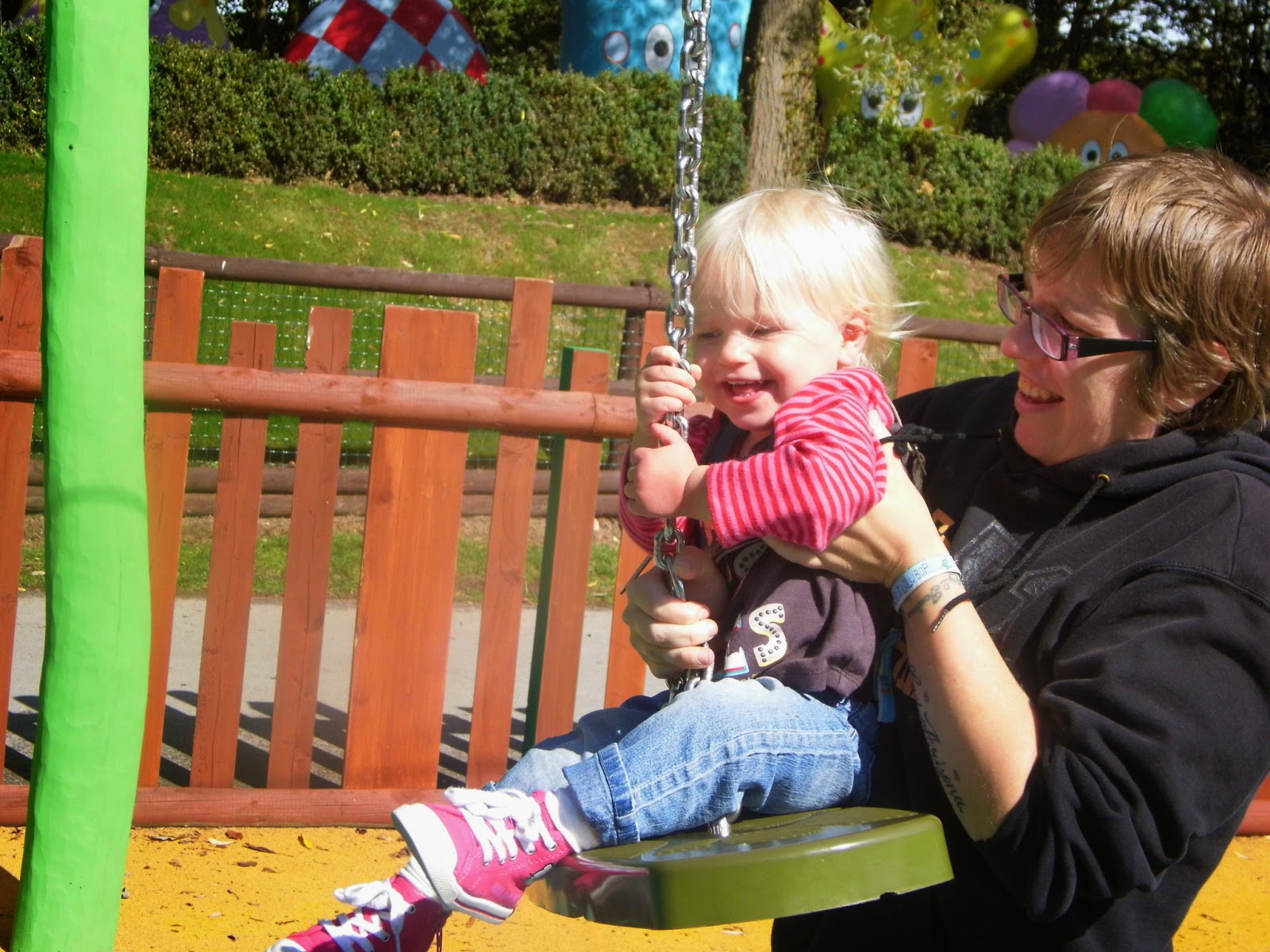 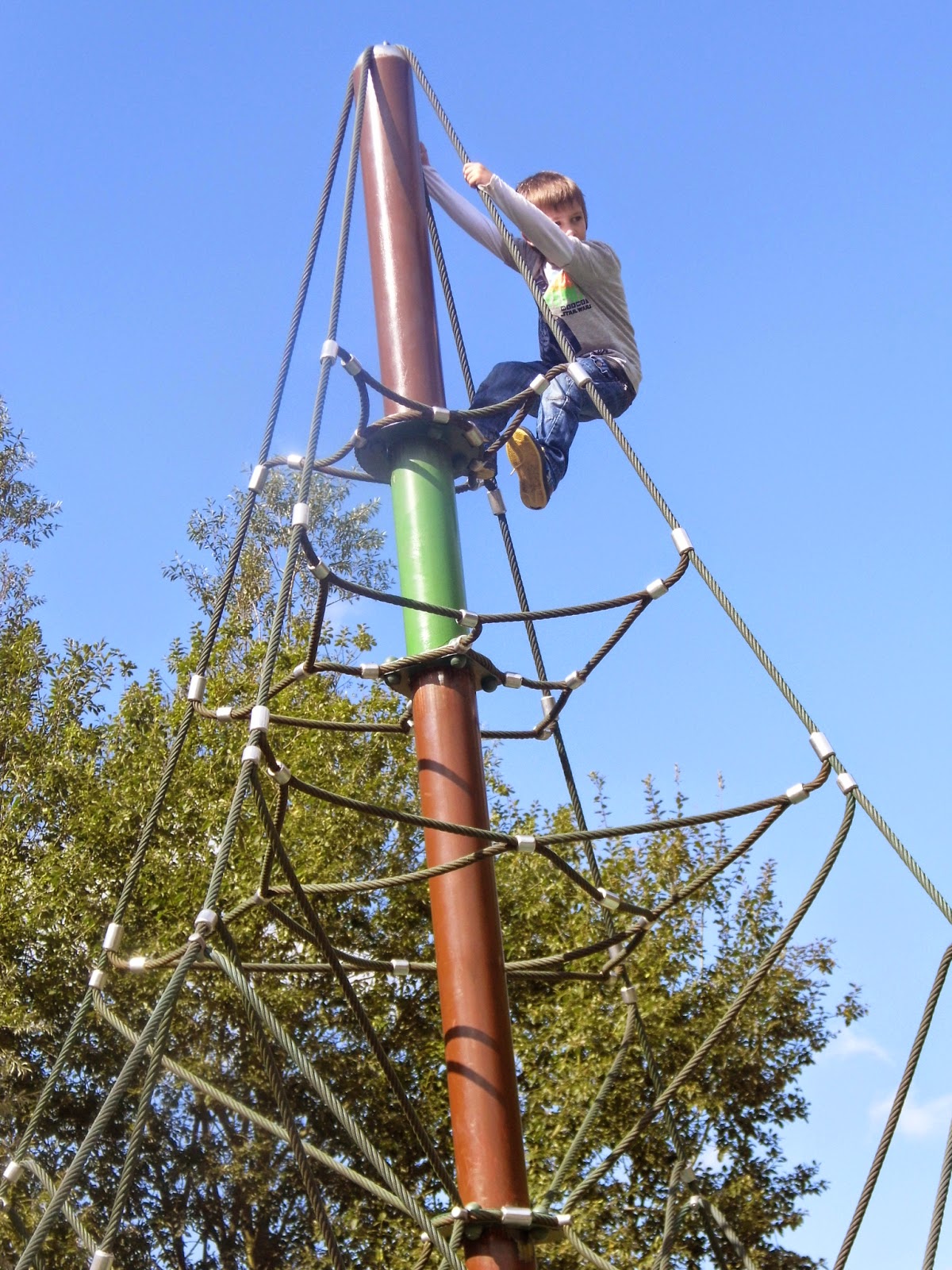 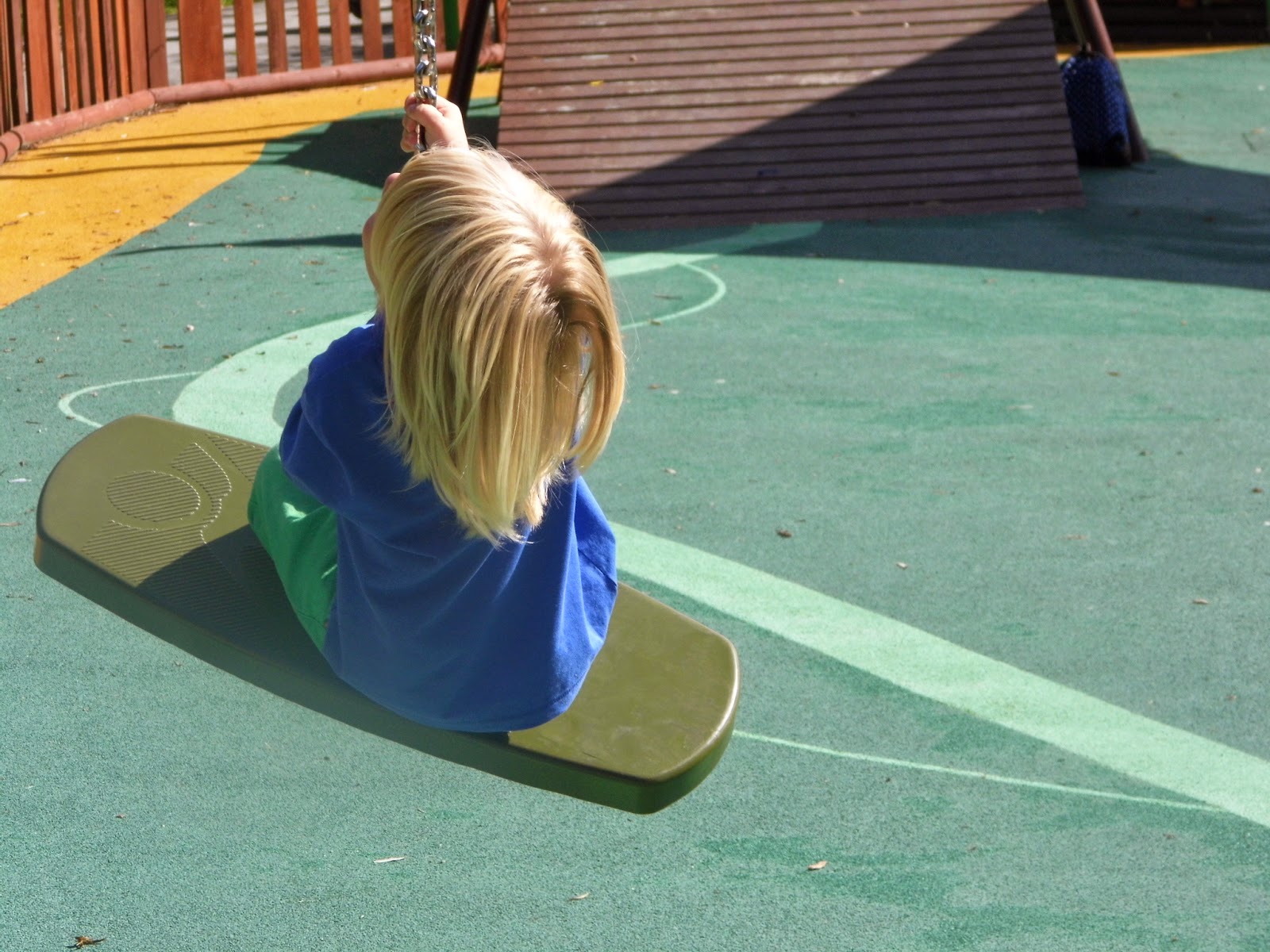 Mummy and Grandma then queued up and took the kids on  Postman Pat Parcel Post ride, the queue for this was quite long so I went to the Big Fun Showtime area to sit and enjoy the lovely sunshine oh and the ZingZillas show too lol. 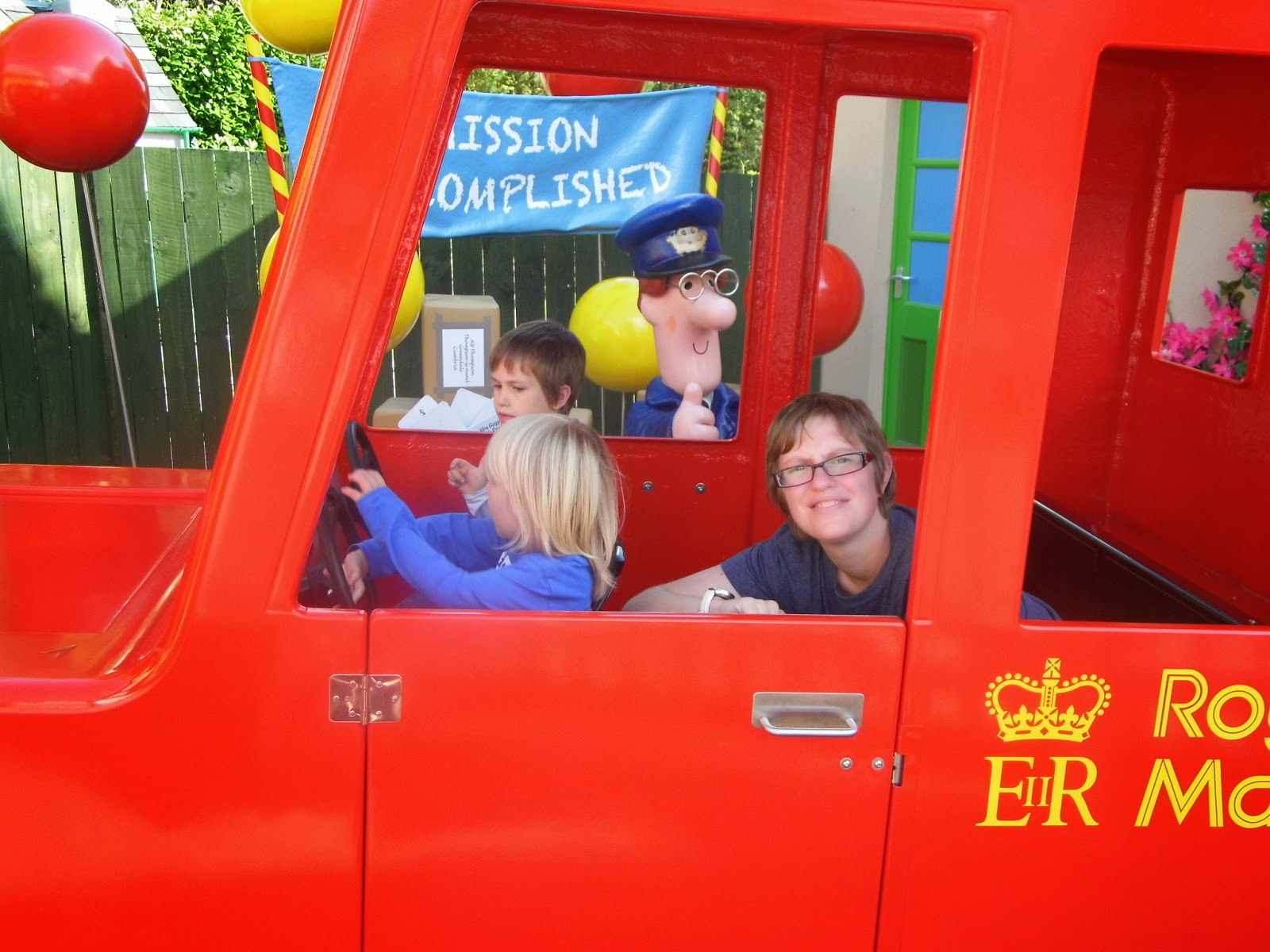 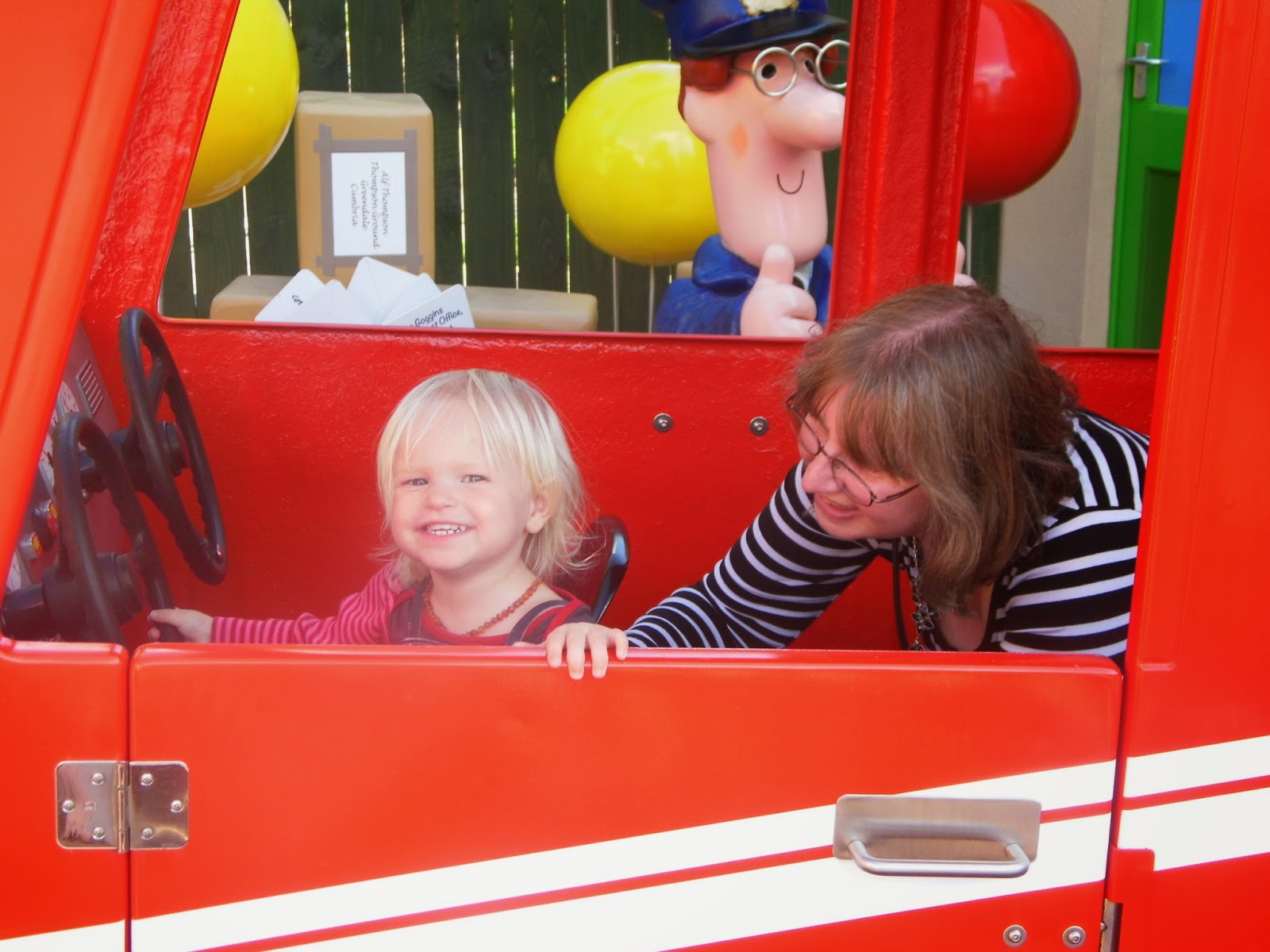 Before we left Cbeebies Land mummy and Grandma took the kids on the Tree Top Adventure for one last time, mummy was gutted as the cart she went in with the boys wasn't working right so they had no Cbeebies presenters talking to them whilst on the ride. 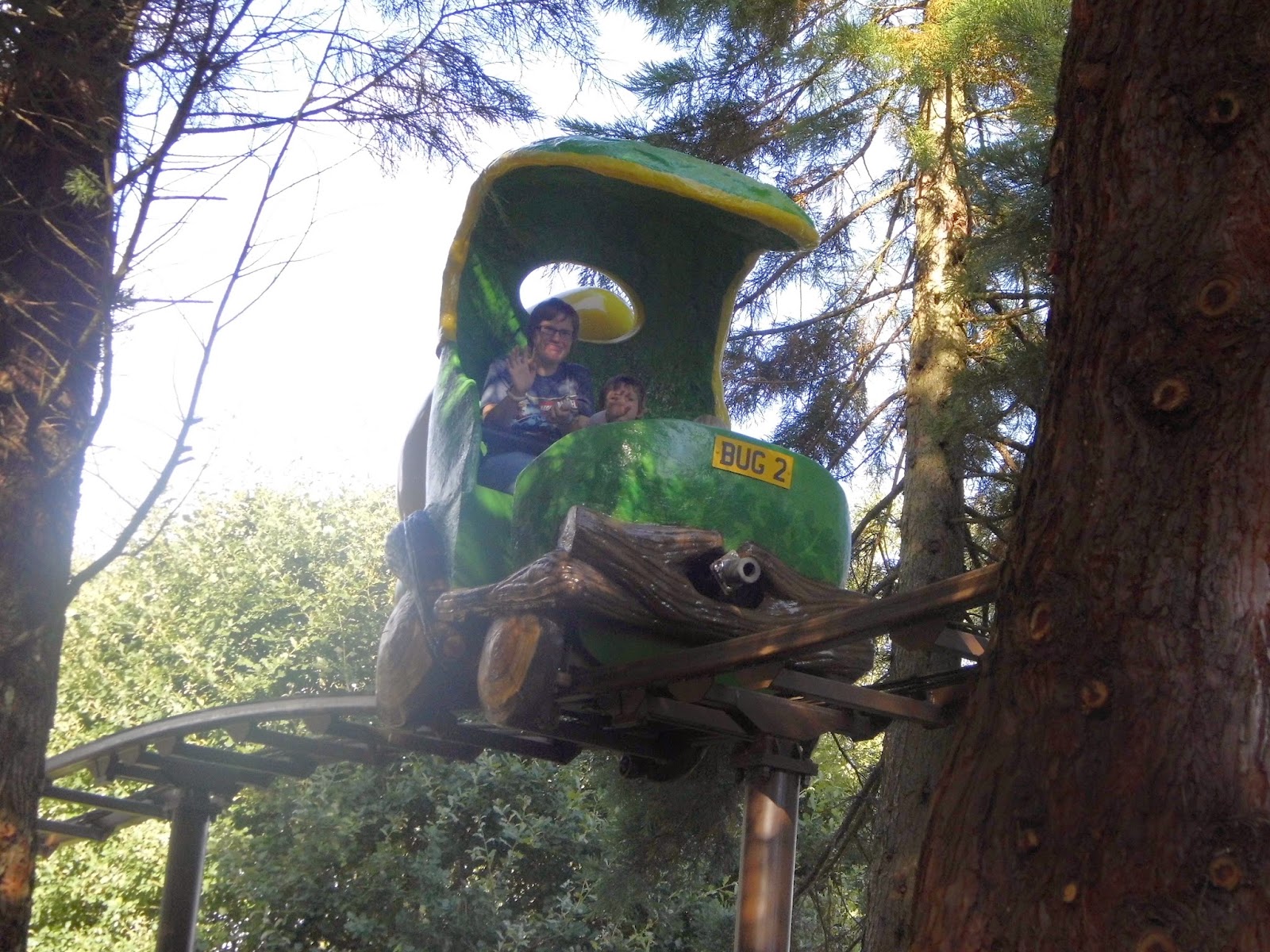 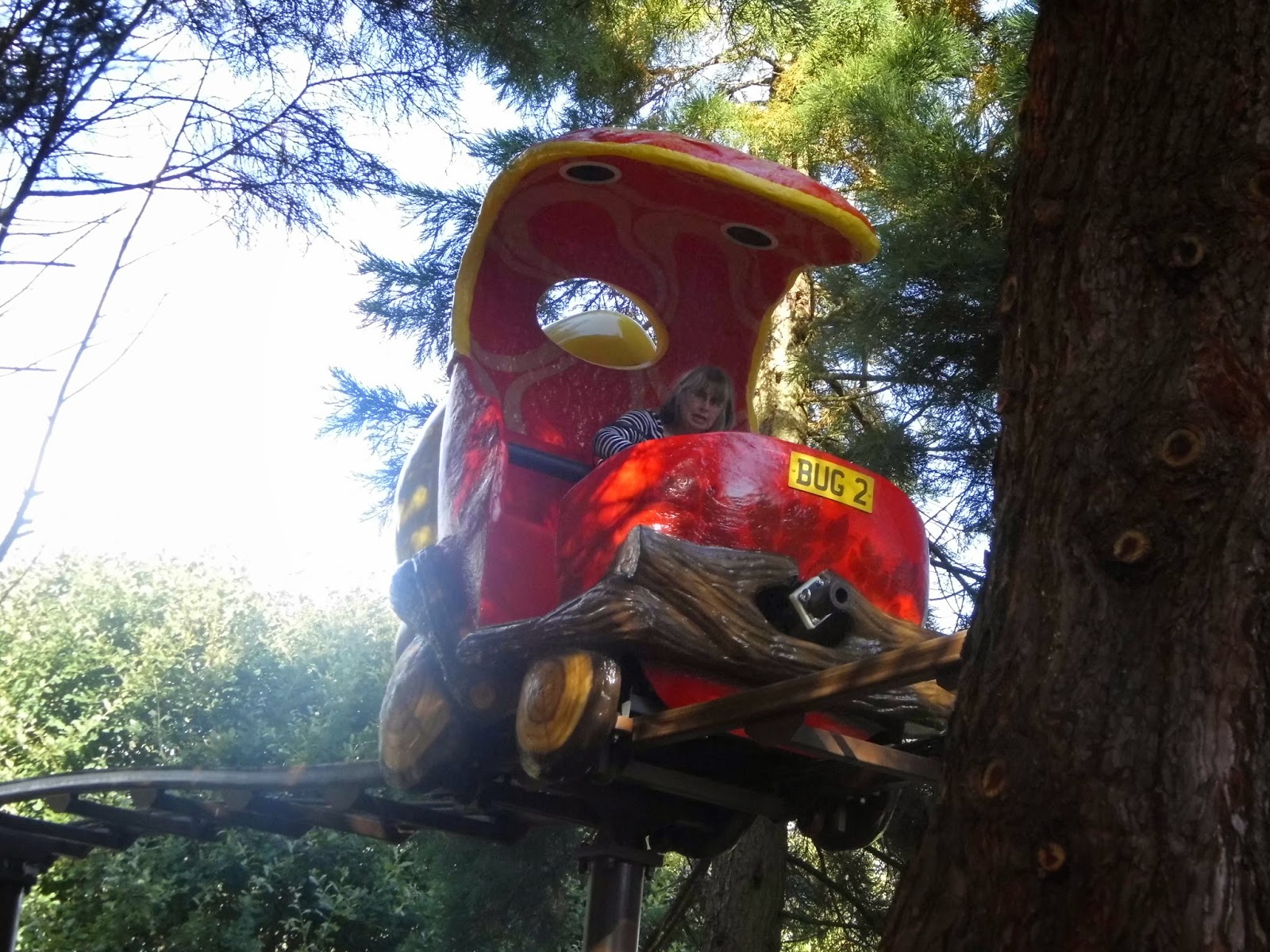 As the day was drawing to a close we had time to go on one last adult ride so mummy and I went on Nemesis, a ride that my wife and I first went on together somewhat nearly 16 years ago.

Well after this we ended the day by going on Charlie and the Chocolate Factory ride, L-A was enjoying this ride waving at the characters along the boat ride, she was OK until we went into the great glass elevator part of the ride and she screamed until it stopped then cheered when it did.

Well that was our day out at Alton Towers full of fun which we all enjoyed.