Father's Day weekend started for me on Friday at my sons nursery school as they held a Daddy and child model making session.

As Mummy was attending BritMums Live I put L-A in her pushchair and we both headed off to TP's nursery school to see what fun activities awaited us.

Once we arrived at his nursery and finally found him TP took us over to an empty space in his playground and disappeared, then all of a sudden he reappeared with boxes, glue, scissors and sticky tape saying "Daddy, Daddy I wanna build a T-Rex, I wanna make a T-Rex Daddy" at this point I thought " God help me, how am I going to do that?".

So I grabbed the boxes and thought very hard about how to make a T-Rex or even something that might even resemble a T-Rex or even something that would look like a dinosaur to be honest whilst I was looking round and seeing other Daddies constructing wonderful looking model dinosaurs.
I began sticking boxes together and attaching toilet roll tubes to the boxes whilst TP disappeared off with his friends, playing and looking at what their Daddy's were making. "A T-Rex is what he wanted" I could hear myself thinking, "it looks more like a bloody robotic spider" I could hear myself saying aloud. 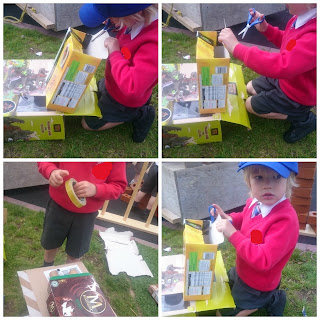 TP finally reappeared with an apple in one hand and a carton of milk in his other, he looked at his model, looked at me smiled and said "Daddy that's awesome thanks" music to my ears. 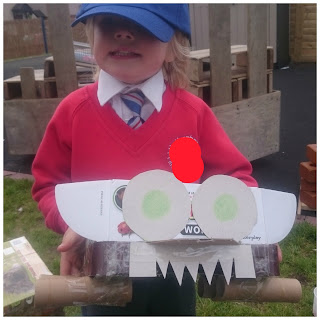 As well as model making the children had dinosaur related stories read to them, they played games based around dinosaur themes and everyone had a fabulous time right up till it was time to go. 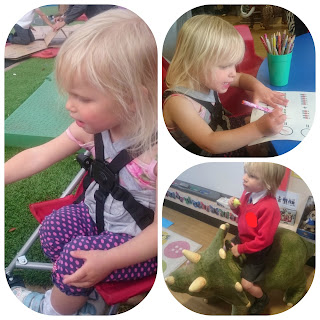 Now was the time I have to openly admit that I enjoyed and enjoyed I did just that lol. I've not gone mad but picture the scene if you can, all morning the Daddy's had been making fabulous models for their little treasurers, obviously although they won't admit it they were competing against each other as Daddy's do to make the best and the biggest models going. Mine was about the size of a standard computer keyboard and easy to carry this is were it go fun.

The teacher pipped up with "the session is now over, thanks for coming, hope you all had fun and please can you all take your models home with you", boom that was like most of the Dads had been smacked in the face by the teacher herself as you could see the Dads thinking "great I made this bloody model big how am I supposed to get it home?" Whilst I just walked past them all with TP happily carrying his model easily home for everyone to see what we'd made at our model making session lol.