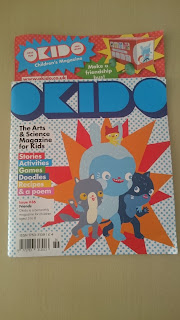 This issue of OKIDO is all about having friends and making new friends.

(Here is Messy Monster and his friends Zoe and Felix.)

This issue to be honest has come in handy just at the right time as my boys are both going back to school where they will be going back to both old and new friends alike.

This is a good little story that my boys enjoyed because it taught them that even if people don't initially want to be your friend don't be nasty in return as like Grumpyko they may still need your help and then through that become your friends. 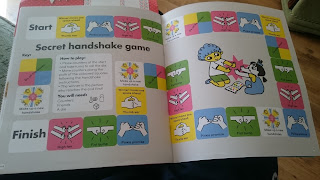 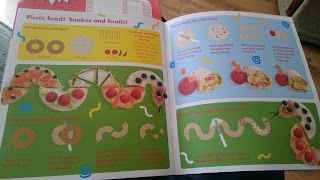 Okido magazine, created in 2007, is an illustrated bi-monthly arts and science magazine printed on FSC paper using vegetable inks and contains no adverts. Okido magazine costs £4, retails through over 50 independent shops, galleries and museum stores, has over 2K subscribers and is distributed via Intermedia. Each issue of Okido contains scientific questions and theories, which are answered in the most creative and artistic manner, for children to explore at home with their families and with regular leads into the national curriculum.

Starting on Monday at 4.20 on Cbeebies Messy Monster is brought to life in his very on show.

Messy goes to Okido is an animated TV series, directed by Bafta winner Liz Whitaker (Bob the Builder, Pingu and Timmy Time). Messy Monster is brought to life by lead voice talent Adam Buxton (The Adam & Joe Show, Bugged, Son of Rambow, Hot Fuzz). Each episode of Messy goes to Okido is based on themes drawn from the OKIDO magazines; gravity, snow, floating, rain, hunger, germs, magnets, atoms and colour. The show is aimed at pre-school children and is a mix of CGI and 2D animation combined with live action. The series is produced by Doodle Productions in London.

Here's a trailer for your little ones to enjoy.