This year thanks to my amazing nan I spent my Birthday visiting my little brother in Benidorm.
Unbeknown to me my brother had organised a surprise for my birthday, no nothing naughty you dirty minded lot lol.
He had in fact arranged for us to spend two days in Valencia, not only that he had also organised us match day tickets to watch Gary Neville's first game in charge of Valencia against Lyon in the Champions League.
Quick note to everyone at this point I'd like to go on record and say my brother is the best brother in the world ever.
Wednesday night came around and we got ourselves changed and made our way over to the Mestalla, the home of Valencia CF. 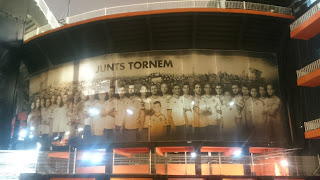 As we arrived at the ground we noticed the police on horse back were blocking off the road and stopping the fans crossing from side to side.
It was soon apparent why as all of a sudden the home fans started jeering and booing, I turned round to see the Lyon teams coach driving past us and pulling in metres away from where we stood.
No sooner had they pulled up the home team coach pulled in and the atmosphere changed to cheers and whistles, that pretty much continued until every player departed the coach and entered the stadium. 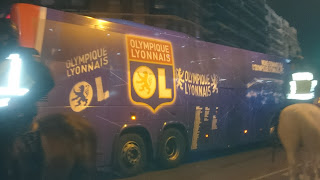 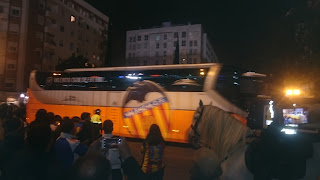 ﻿
Once the police cleared everyone to cross the road again we made our way over to a special little bar which belongs to none other than the famous Manolo. 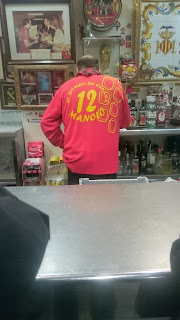 Ok at this point most of you are asking who? I won't bore you with vast details but he is the Spanish National Football team's official drummer, his been all over the world and to ever major tournament Spain has played in, beating his drum and cheering them on. 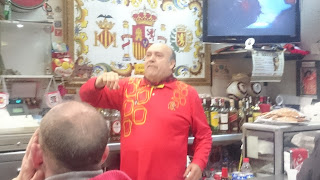 Once we had finished our drink and took in the atmosphere we made our way back across the road and tried to find the gate we needed to get into the stadium. 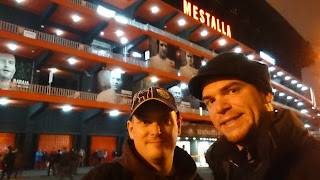 I say tried we walked round the entire ground looking for the gate we need to get into the stadium, we tried a few entrances only to be told at each one "no further round, further round".
Eventually we found where we needed to be and entered the stadium.
Now the real fun began, where in the world were the seats my brother had booked us?
We walked up and round, up and round this path concrete concourse that just seemed to be going on forever and ever and ever until we made it to the top. 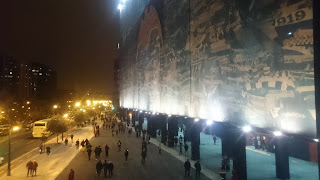 { View from half way up the stadium }
We walked backwards and forwards trying to find the seating block we were meant to be in and we were being told by different stewards "it's up there, round there" till eventually a nice steward with broken English told us the ticket numbers were wrong and in fact it was the block above where we were standing.
We climbed our last flight of stairs in the direction of our seats, as you can imagine by this point we were in the land of the God's we were that high lol. 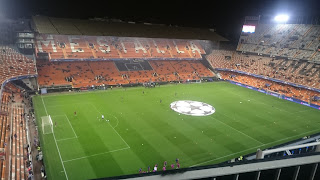 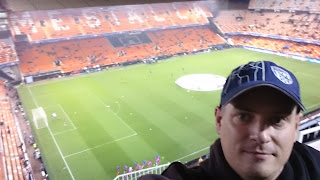 We walked through the doorway and what awaited us was truly awesome the view was amazing, you could see all around the ground, although the dug out area seemed miles away you could still make out Gary Neville sitting there in his grey (Monday Night Football) suit chatting to his assistant. 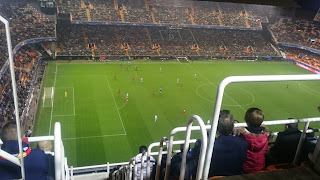 The atmosphere before the game was awesome, the fans cheering the players whilst they warmed up. Even the brief bit of rain we had didn't spoil that.
The game itself was mixed to be honest, Valencia played some good football but never really looked like causing Lyon any trouble whilst Lyon took their chances well and went on to win 2-0 and subsequently knocking Valencia out of the Champions League.
Even the loss didn't spoil our night, ok so a win would of been amazing but it was still a truly awesome birthday present from a truly awesome brother, thanks bruv.
Posted by Unknown at 19:57