Recently on Twitter I've noticed peoples Halloween Pinterest popping up here and there sharing their wonderful ideas for you to have a fun filled Halloween time with kids of all ages and almost every shop you go have up or are starting to decorate their shops ready for Halloween.

This year will be our first year as a family we won't be at home celebrating/participating in the Halloween festivities. We will however be at Coombe Mill and can't wait to see what wonderful activities Fiona and her lovely family have in store for us to participate in.

When I think about Halloween festivities two occasions spring to my mind, one being a kiddies party we held at the flat when JR and his friends were only 11 months/ 12 months old and the other has to be when my wife and I visited visited Magic Kingdom and attended the Mickey's Not So Scary Halloween Party.

The kiddies party was fun, they all came dressed in really cute costumes, to be honest it wasn't much of a party as all they did was sit and play with toys but it was our very first Halloween party we'd held so it was fun never the less, I put on a finger buffet and we played a few party games, everyone seemed to enjoy it so that was good. 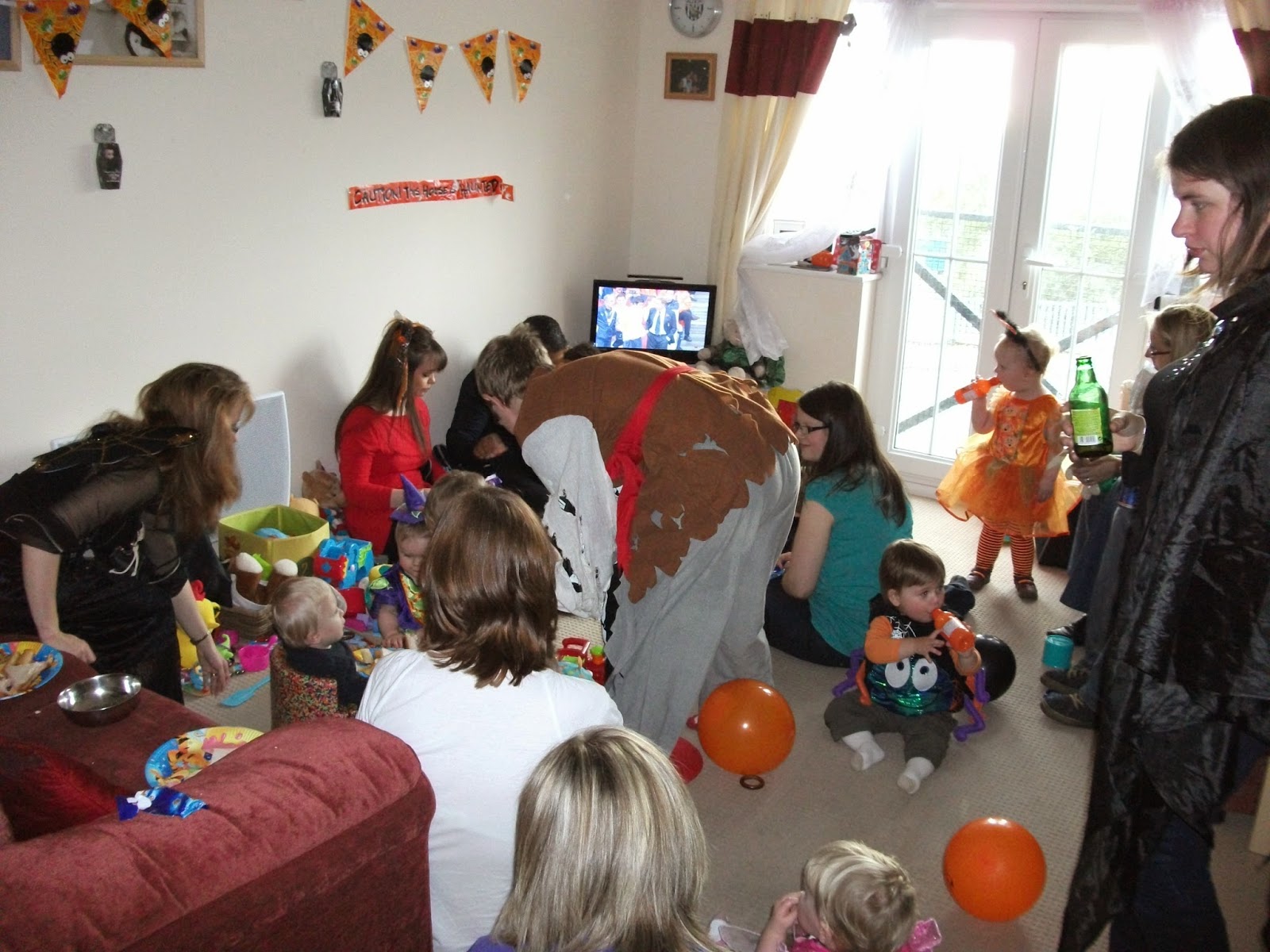 Mickey's Not So Scary Halloween Party now that was a fabulous occasions.

Disney put on the family Halloween party to celebrate Halloween whereas at the same time Universal Studios held their own shall we say more 'grown up' party with lots more scary sights and sounds. Even the giant billboard outside Universal Studios and their TV advertisement for their party was scary to be honest. 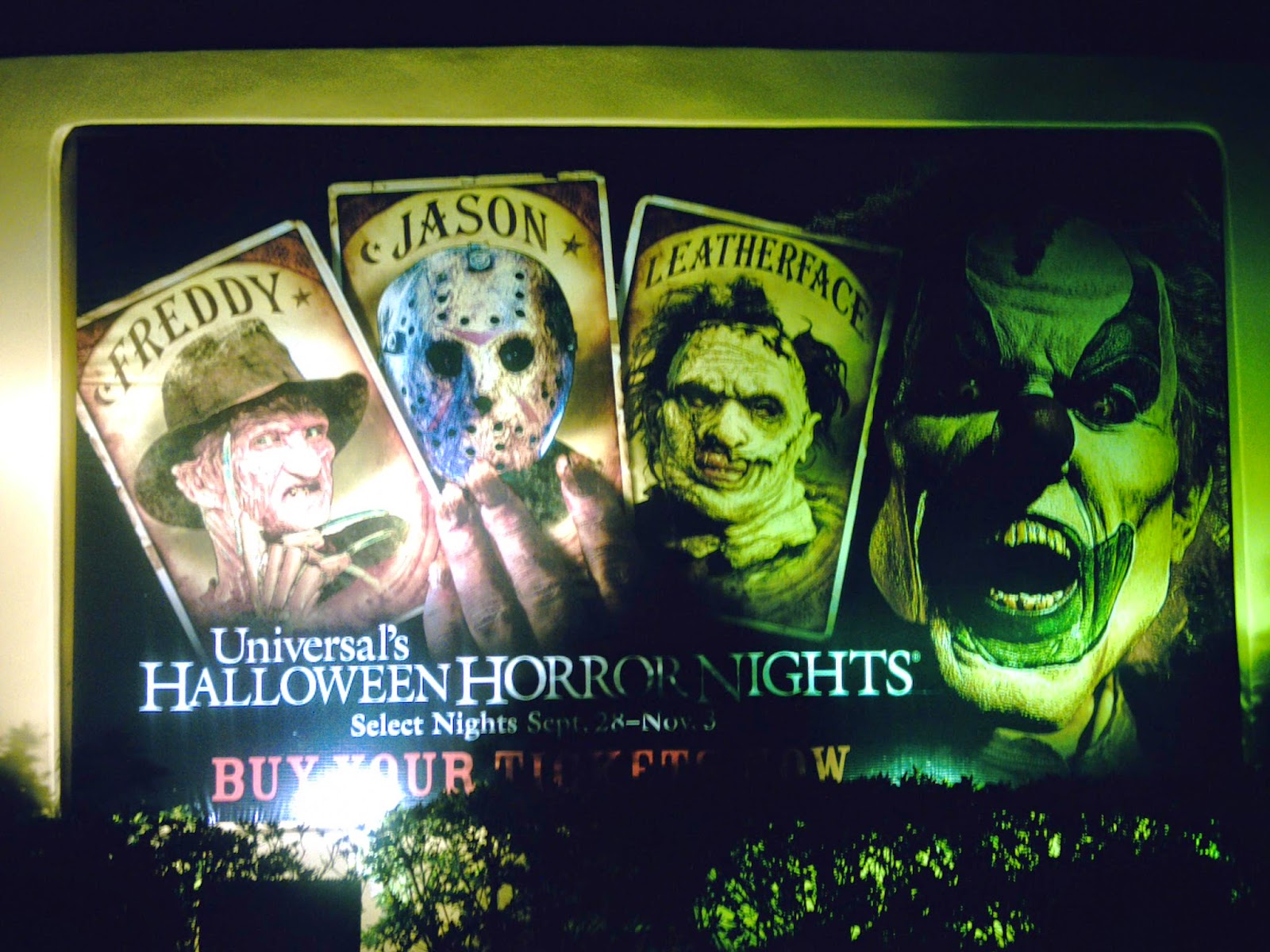 The TV advertisement started off with a young man in his mid 20s I'd say sat at a fortune tellers table in a carnival tent with the female fortune teller sat in front of him looking into her crystal ball, the teller then said something like "I see terror and fright in your immediate future" upon this she shot backwards in her chair away from the young man and the young man was immediately surrounded by Freddy Krueger, Jason Voorhees and the clown from the IT film. These three characters are who are on the giant billboard too.

As my wife doesn't like scary films and such forth but loves Disney we were only ever going to go to Mickey's Not So Scary Halloween Party to be honest. 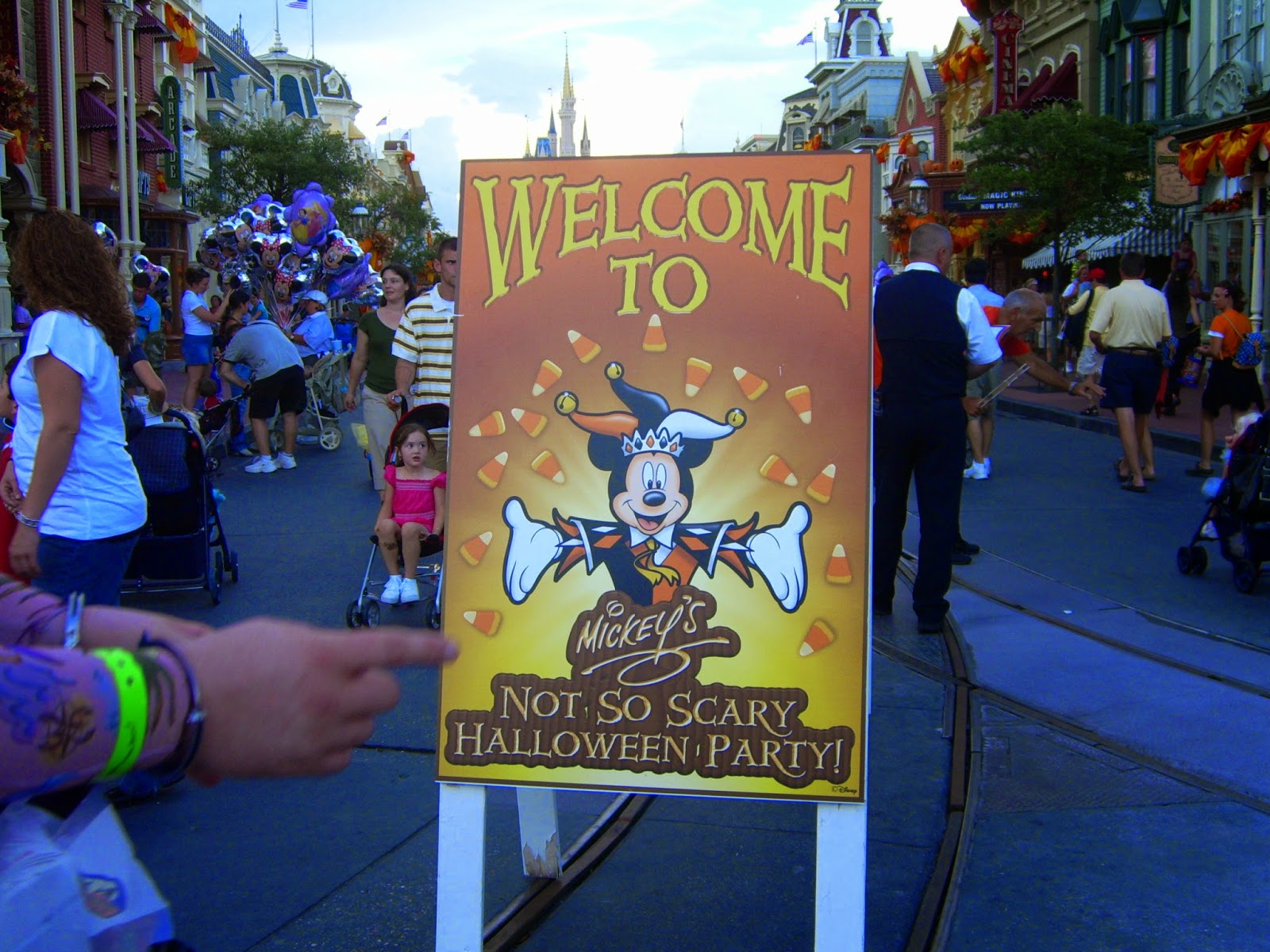 We spent the whole day in Magic Kingdom and as time ticked closure towards park closing time the visitors started to leave the park, this was our cue to get changed, we put on our costumes and joined up with the the many hundred of party goers who had either been at the park all day like us or had turned up to participate in the Halloween festivities.
My wife had chosen to dress as a zombie pirate and I had chosen to dress as an escaped convict complete with ball and chain. 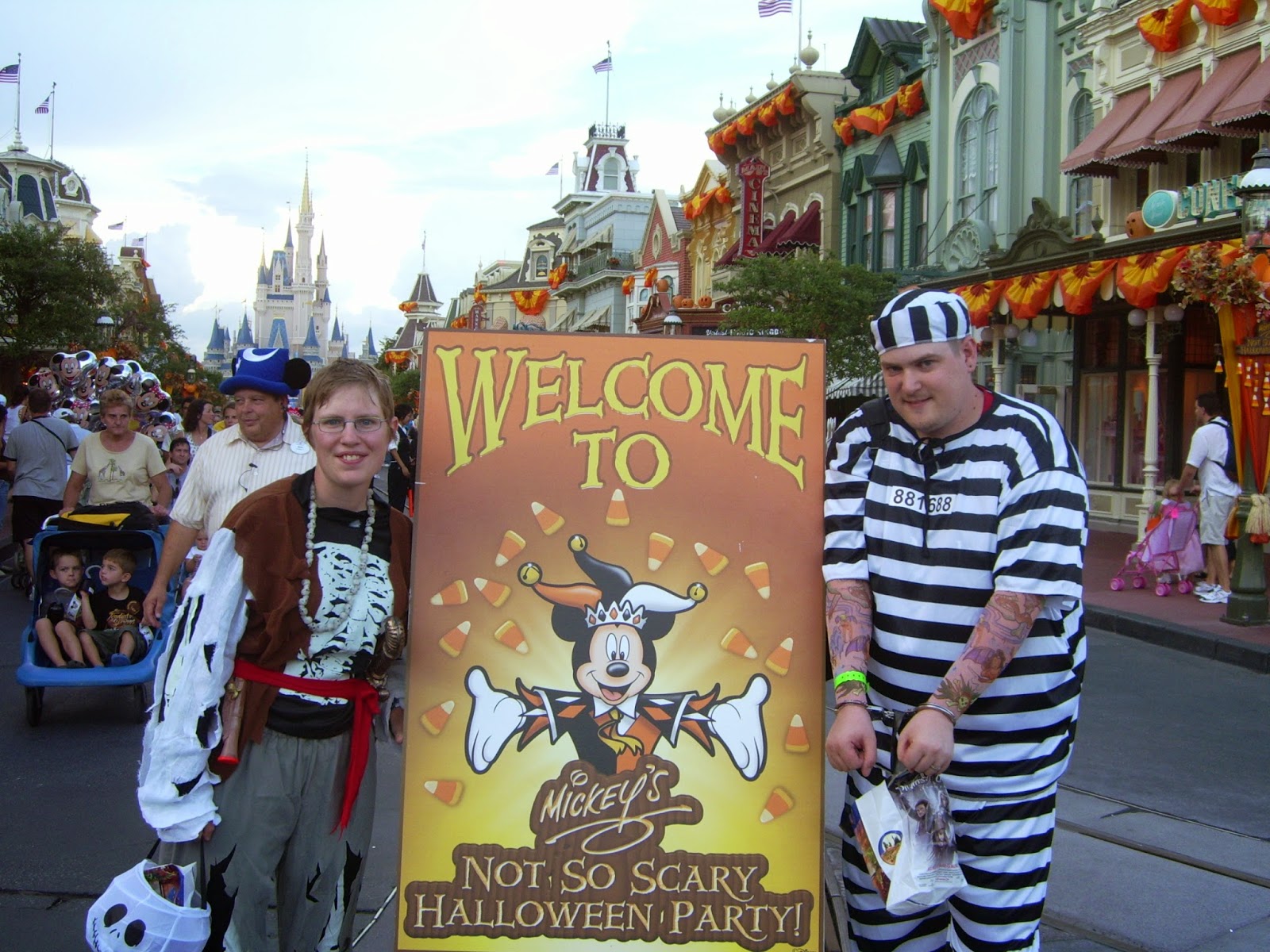 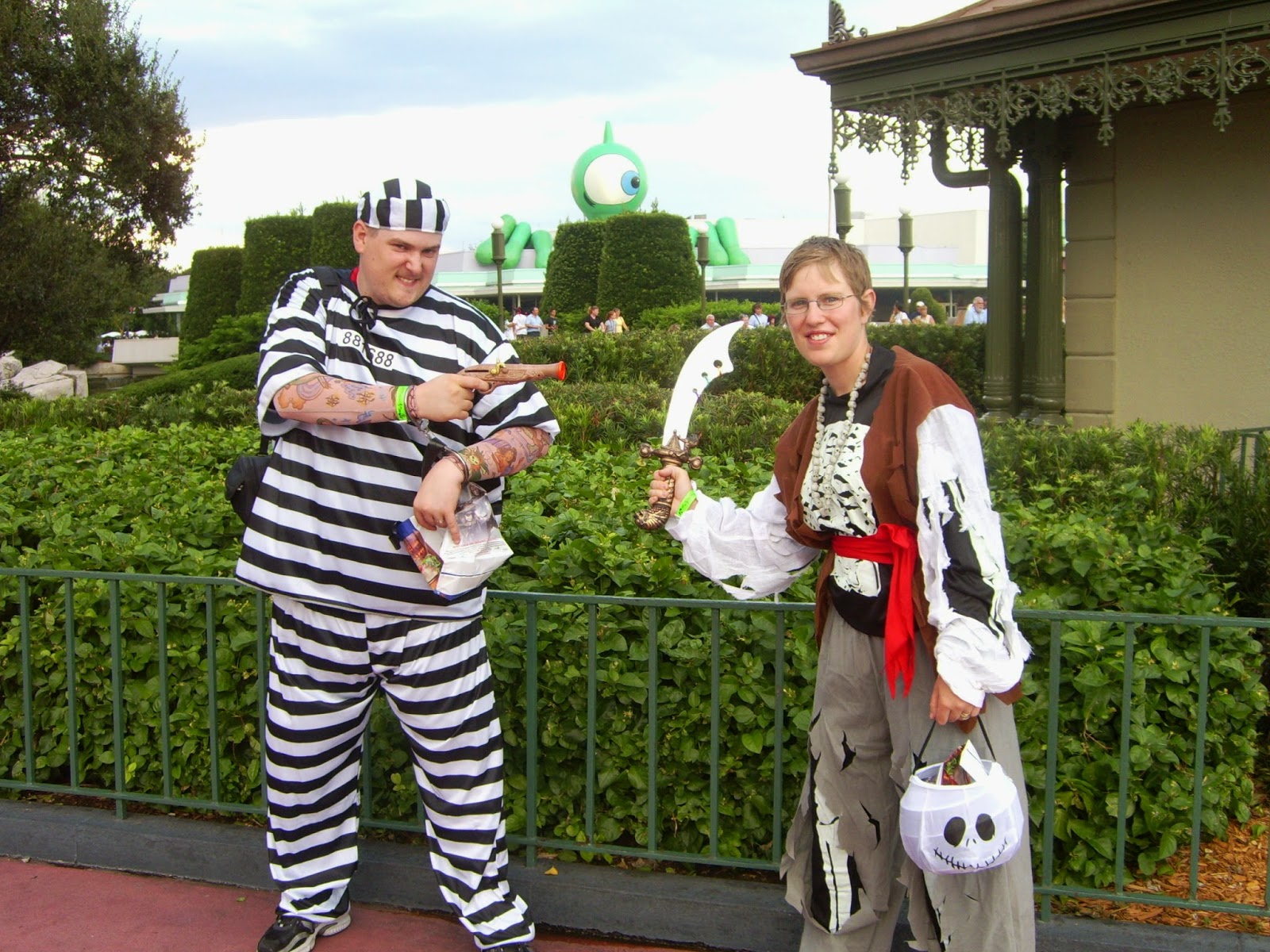 Well Magic Kingdoms normal end of day fireworks and light show was over and the bells chimed seven pm signaling the start of the Halloween festivities, the night began with an awesome fireworks and light show and a stage show right outside of the Magic Kingdom castle which was presented by the baddies and villains of Disney like Jaffar, Hook, Maleficent and many others, which was totally different to the normal daily bubbly shows presented by Mickey Mouse and friends.

Once we had watched the show we made our way to Mickey's Toontown Fair where we took part in a fantastic trick or treat hunt, this was really fun and my wife and I filled our sweet pots full of some wonderful American candy of all kinds.

The park had kept open a handful of rides during the party too, it was fun going on rides like the haunted mansion and Buzz Lightyear's Space Ranger Spin dressed in our costumes. We also watched a fantastic parade of all the baddies and villains which was started by the headless horseman running ahead of all the parade floats, it was a fantastic parade and great to see the villains in their very own parade too.

I truly enjoyed Mickey's Not So Scary Halloween Party and I am so glad we booked up and went to it, I would recommend it to anyone whatever your age because everyone there gets dressed up and caught up in the festivities.

I'm linking this post up to the lovely Charly Dove and her weekly linkie
What's The Story.