Over the years I have been lucky enough to have been on some wonderful holidays both before I started dating Tammy and since we have been together.

The holiday which stands out most in my mind before Tammy and I started dating Tammy would have to be my family holiday to Malta when I was about ten years old, ( yes that was many years ago before anybody says anything lol).

I'll set the scene a little first before i go into the holiday, before my grandfather passed away he wanted to take both my brother and I on holiday to Malta with him and my nan. As he was becoming very ill my dad advised strongly against, so in his memory and once my father could afford it he took our family to Malta on our first holiday abroad.

We did so much on this holiday, visited so many fabulous places and meet and became friends with some amazing people which in turn help make some fantastic holiday memories.

Strangely though one thing that still stands out clearly from this holiday took place before we even got to Malta, it took place on the aeroplane going there. Thinking about it now it would cause a major alert today but back then it was obviously clearly OK to do, I along with a handful of other kids on the plane were allowed to go into the cockpit and meet the pilots and see what it was like to fly a aeroplane, as a ten year old boy this was a pretty cool thing to be allowed to do.

The holiday which stands out most to me since Tammy and I have been together has to be without a shadow of a doubt our honeymoon in Florida. Although we have shared some wonderful holiday memories/moments together over the last sixteen years whilst we have holidayed to Spain, France
(Euro Disney) & Crete our honeymoon has to be the top of the list for me to be honest.

We had a wonderful wedding and reception on Saturday 19th August 2006 and we went on our honeymoon on the Tuesday afterwards. As my wife is a Disney nut I let her organise the whole holiday, where we went, what we did, what shows we watched and even where we were going out to eat. As shes a big kid at heart and is really into everything Disney I knew it was going to be a fun filled holiday and I wasn't disappointed at all as the holiday was fantastic from start to finish.

Tammy had booked and sorted out everything so we knew what we were going to do and where we were going so we didn't miss out on anything. We did so much in this holiday there is just too much to write about to be honest but Tammy being proposed to by Goofy stands out as a funny moment. 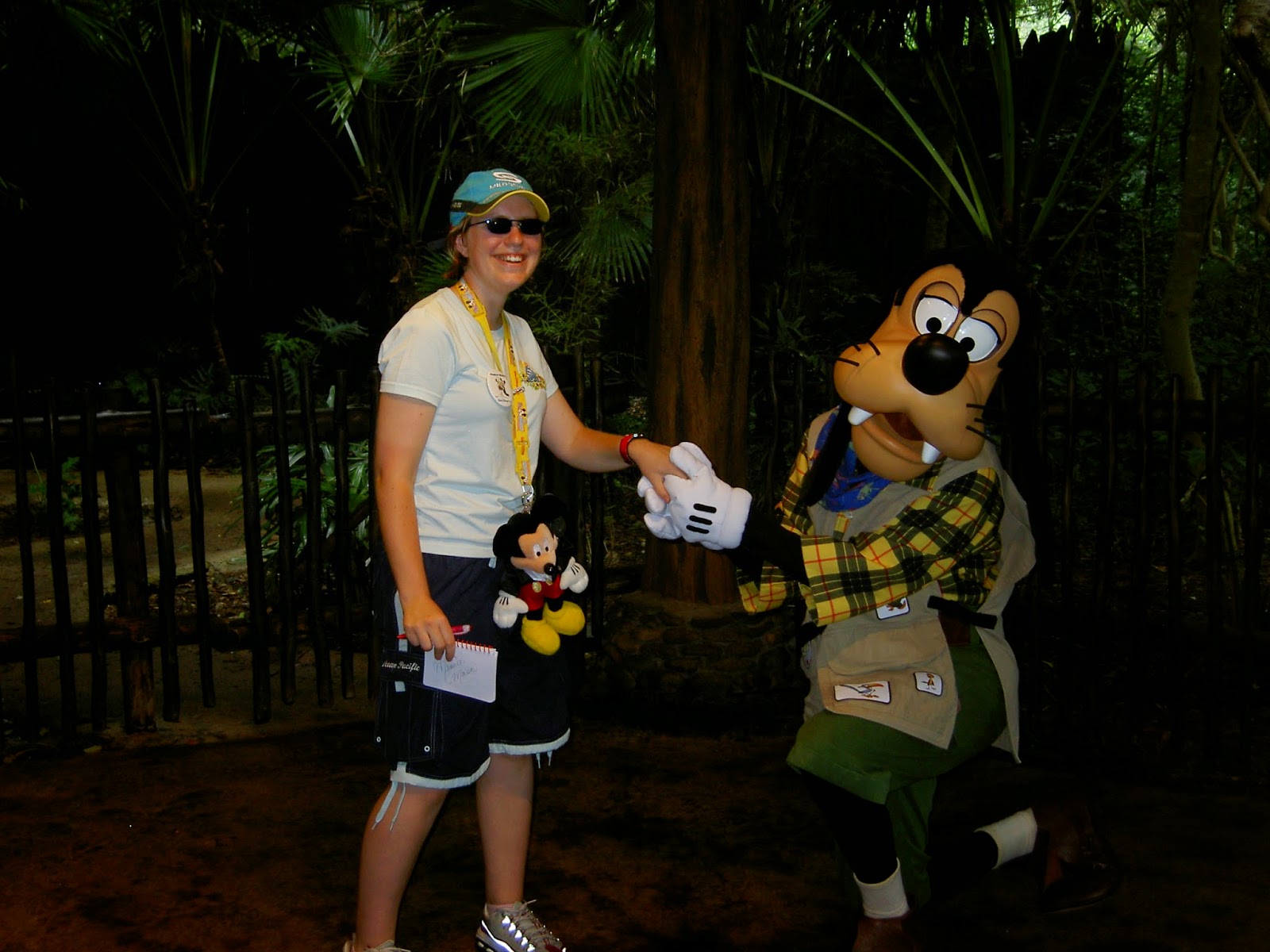 Going to Bush Gardens and hand feeding giraffes on the safari run was a truly amazing part of the holiday too.

One rather unique moment which stands out for me whilst we were at Magic kingdom was when we were looking round the old cinema and the history of the Magic Kingdom park which was situated behind the Kodak photo shop on Main Street,

Whilst we were in there we noticed this was where the characters came through to go out the back whilst taking a rest period from the meet and greets on main street, this was where Tammy was able to get her picture took with Pinocchio in a Toy Story photo stand thing, if you look carefully in the picture below you'll see Pinocchio's face (left hand side) sticking out next to Tammy's. 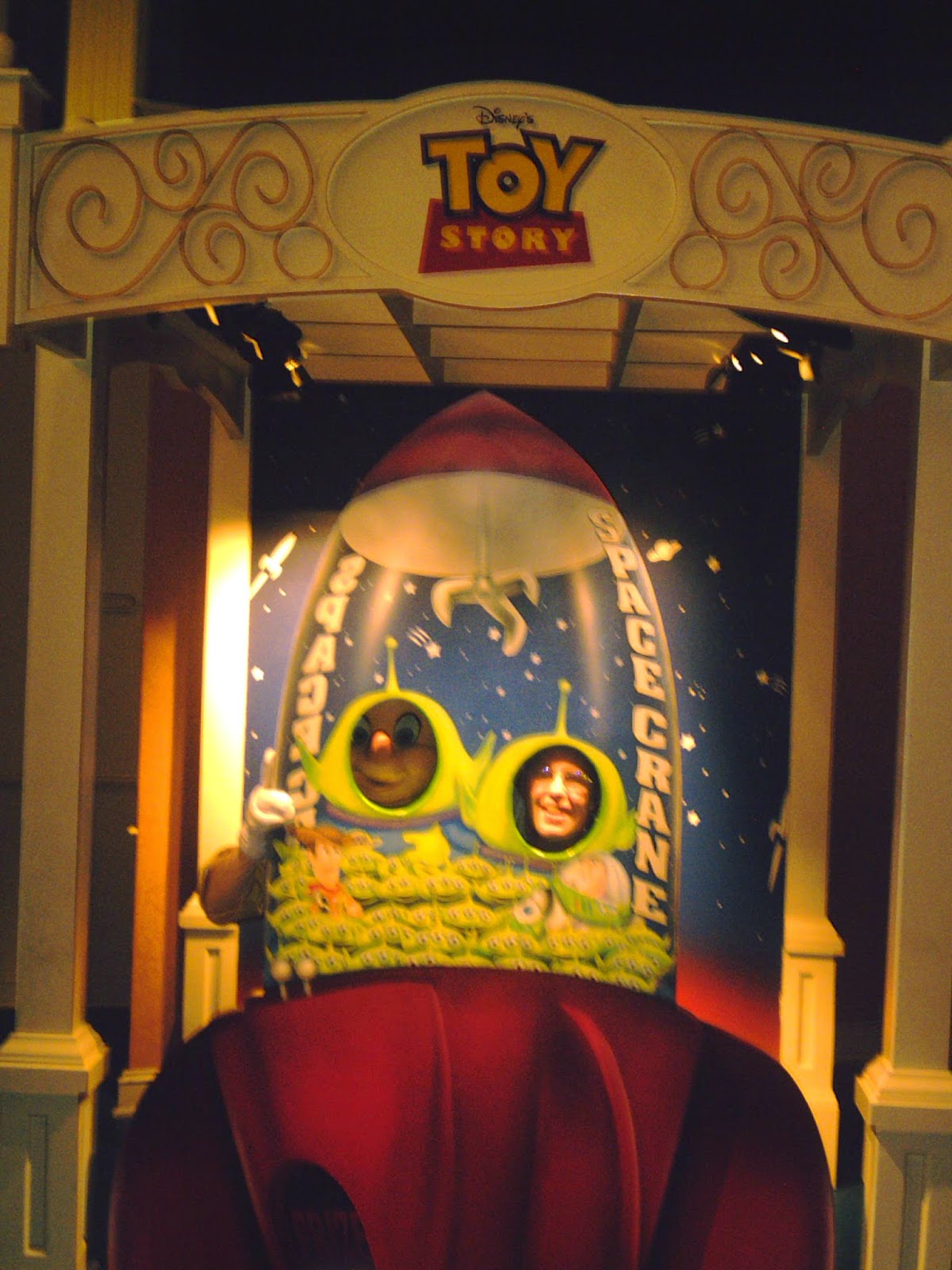 Well that's some of my holiday stand out moments shared with you, what wonderful or disastrous holidays have you been on? what stand out memories/moments do you have good or bad to share?
Posted by Unknown at 21:44