Today we took the kids (wife included lol) to the little fun fest event which was being held at York Maze.

This trip had been booked for what seemed like months now, but the big day was finally here. We packed ourselves into the car and off we went on our long journey to York Maze.

The kids had no idea where we we're going apart from they we're going on a long journey to meet some special people and to have a fabulous day out.

The journey wasn't too bad to be fair, we had contemplated booking a hotel room for Saturday night then doing the rest of the journey Sunday, but as it was only going to take two and as half hours I thought save the cash just drive there and back in one day, so I did lol.

We arrived around 10.30 and made our way inside the farm grounds. We we're firstly greeted by a darlek, it slightly scared the kids but hey ho over time they've scared many a kid I can assure you lol.

We then had a quick chance to have a photo opportunity with Harry Potter, Ok it wasn't the real Daniel Radcliffe but it was still Harry Potter.

We then had a flick through the running order of the day for the shows and meet and greets and the site map to see where everything was situated so not to miss out on anything.

First port of call was the opening show which was put on by a character called Derek, who strangely looked a lot like Alex Winters from Cbeebies. My eldest knew it was Alex straight away but we had to pretend it wasn't. 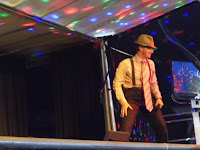 We then took the kids, yes all the kids including my wife on the various fair ground rides and the other attraction on offer to all the visitors.

The boys were brave and went on all the rides themselves whilst my wife took our daughter on the merry-go-round.

I took the boys on a attraction called cornfussion, this was the farms version of a fun house with spinning walls, moving floors and upside down rooms. It was funny letting the boys lead me through all the different rooms, bumping and crashing into things along the corridors and fake doors.

We watched the Mister Maker show and also made magic wands and planted magic beans in the wizardry zone. 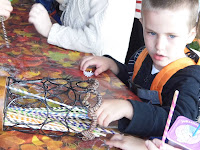 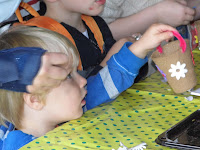 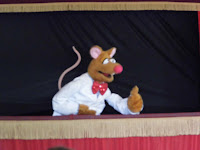 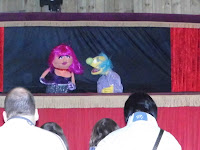 We then took the kids to the show tent where they saw a puppet show and then they joined in with all the others kids in story time with Alex Winters.

My wife got talking to a fellow blogger (who just so happens to work for little fun fest) who kindly invited us to the private meet and greet session of the CBeebies presenters. 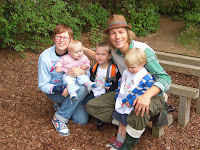 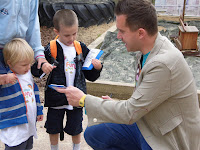 They meet Mr Bloom & Mister Maker. They got their autographs and had their picture took with them.

My daughter had her picture took with Alex and he took such a liking to her he almost ran off with her and took her home (its a good job we know him) lol. 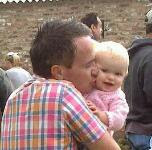 To finish the day off we watched the final segment of the show, this was a dance off between the boys and the girls. J R was chosen out of the crowd to represent the boys which was pretty awesome to be honest and yes the boys won lol.

There was one final special treat install for everyone before we all headed off home.

There was a competition between farmer tom (the owner of York Maze) and Alex Winters, whoever blew their balloon up and popped it first won and the person who lost got gunged, yes you heard right gunged just like good old Noel's house party or Tiswas if your of the older generation.

Guess who lost? Yes you probably got it right, good old Alex Winters. He not only lost the challenge but in the process got a good gunging, which of cause everyone found totally amusing and thoroughly entertaining.

That was a really good end to a really good and thoroughly entertaining day, we as a family cant wait for the next little fun fest. 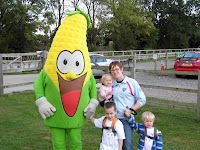