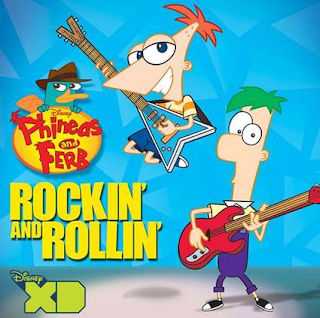 I was recently approached by rockandrollbabyworld to see if I would be interested in reviewing the 3rd installment in the Phineas and Ferb franchise titled: Phineas and Ferb: Rockin' and Rollin' album.

My boys love watching the TV show of Phineas and Ferb on the Disney XD channel so naturally I jumped at the chance.

This album was released on Monday 9th September and it contains 25 various songs which span the four seasons of the hit TV show Phineas and Ferb.

This is not a greatest hits album but it does contain unreleased fan favourites. The music on the album can be enjoyed by all with a bit of country, dance and R&B thrown in to make this album fun and upbeat.

I was right of cause, as soon as I started playing the tracks the boys were up dancing about and thoroughly enjoying all the tunes on the album.

This CD album is available to download on iTunes, the individual tracks cost $1.29 and the album itself costs $9.99. I think this is a very reasonable price as it converts to around 80p per track or the whole album you can purchase for £6.20. (Conversion rate checked on Friday 20th September)