Two customers of mine are off on their annual monthly holiday to Florida next week, (i have been to Disney World Florida twice and thoroughly enjoyed it) and along with my wife recently writing a post about halloween it got me thinking about when my wife and i went to Disney World, not only were we there celebrating our honeymoon but we also joined in with the many thousand of other visitors to Magic Kingdom and participated in their halloween celebrations of Mickey's Not So Scary Halloween Party.

Whilst Disney obviously celebrated halloween in a kids and family friendly way, over at Universal Studios they were catering more for the adults who wished to join in their halloween celebrations. So much so that I have never seen such a scary advertisement boarding or have i seen one since as scary, the television advertisement was just as scary consisting of a young man getting his fortune read from a crystal ball and having freddy, jason and IT appear out of the dark and surround him.

I think that i will stick to the Disney version of halloween celebrations thank you, although the villain Disney characters like Maleficent, Queen of Hearts, Captain Hook and Oogie Boogie come out to play, it is halloween after all lol 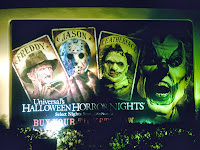